Highway engineering hollow slab structure system can be divided into two kinds: simply supported and first simply supported and then continuous. What we do mostly is simply supported and then continuous. Generally, when we make hollow plate template, we only need to distinguish the middle plate from the side plate, in which the side plate of a template is common with the middle plate. The spans of small box girders are generally 6, 8, 10, 13, 16 and 20m, and most of them are 10, 13, 16 and 20m. The slabs above 10m are usually pre-stressed concrete structures, and the slabs below 10m are usually ordinary reinforced concrete structures. As an assembly structure, the prefabrication of hollow slab is easy to realize mechanization, factory and standardization construction.

_The common hollow slab design prefabricated Mid-slab and bottom width of side slab are 1240 mm or 990 mm. Different span slabs have different height. Simply supported and continuous system is completed by wet joint between span and span. Horizontal connection of hollow slab is wet jointed by hinged steel bar and concrete, and integral bridge deck layer is cast in situ, which ensures that each slab forms a whole and bears a common force.

The standard section of__half-width composite hollow slab is shown in the following figure: 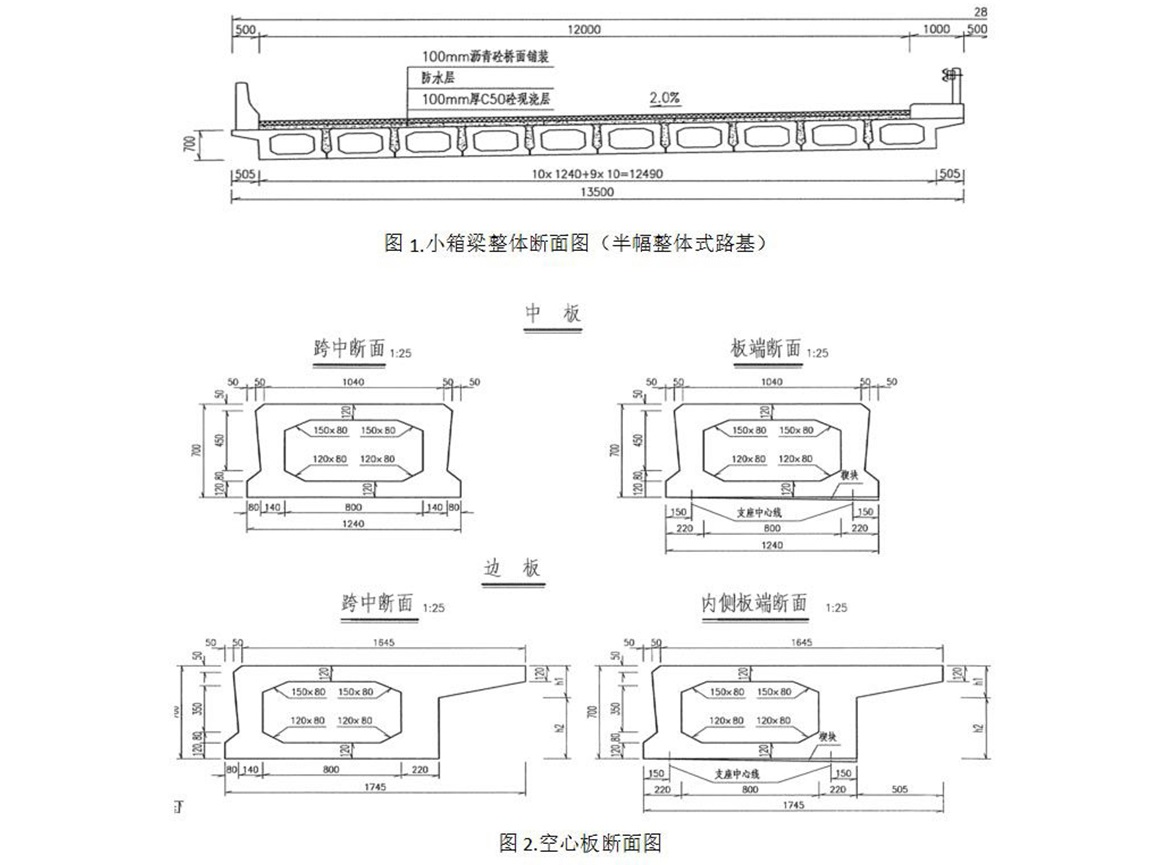 The overall installation sequence of the template is to install the external die first, then the internal die and the end die. The side die package base and end die are adopted. The reinforcing bars and concrete pads are arranged on the web reinforcement to ensure the thickness of the web, fix the internal formwork, and the concrete pads are arranged on the bottom formwork to support the internal formwork. Before installing the template, the surface of the template is treated by a grinding wheel grinder, and then the release agent is coated evenly. When supporting the formwork, the joint between the two formwork is tight, and the slurry stop strip is placed to prevent slurry leakage. Hollow slab formwork mainly uses two kinds of reinforcement methods to fix the external formwork. One is that the formwork is strengthened by upper and lower tie rods and supports. The number of tie rods and supports must meet the stability requirements of the formwork; the other is that the formwork is strengthened by upper pull and lower support rods. The inner die of hollow slab has three forms: steel mould, wood mould and air bag. Most of the steel formwork we made is in the form of core-pulling die.

_Hollow slab formwork is dismantled in the reverse order of assembly sequence. Measures should be taken to prevent the damage of formwork to concrete surface such as bumping.

_2. The section of hollow slab formwork usually considers the beam length and the angle of the beam. The length of the outer formwork is determined by the longest beam length of the maximum angle. The section of formwork is usually divided into equal lengths of beams to centimeters. The subsection of exterior module can also be extended in the form of 1.5m integer multiple as standard subsection and adjustment subsection, so as to facilitate the standardization work in the future. Because of the insufficiency of workspace, the core-pulling internal formwork usually divides the beam under 13m into two sections, and the beam over 13m is divided into three sections, and there is a mother-child opening between the sections to facilitate the overlapping and demolition of formwork.

_4. Prestressed hollow slabs are divided into pre-tensioned and post-tensioned prestressing. Usually, the prefabricated base of pre-tensioned hollow slab is all-length, and many hollow slabs can be prefabricated continuously. The prefabricated base of post-tensioned hollow slab is similar to that of small box girder and T-beam. The outer die of hollow slab generally covers a base of 50mm. When the upper and lower ports are pulled together, the PVC pipe is usually embedded in the cross section of the placenta at a certain distance (usually 500 mm), so that the lower ports of the pull bolt can smoothly pass through the bottom tire and fix the two sides of the external die together. The influence of the base on the formwork can not be considered when the upper opening is pulled and the lower opening is tightened.

_5. When the hollow slab internal formwork is made into steel formwork, the construction unit usually makes the form of core-pulling formwork. At present, the core-pulling die made by our company is usually divided into two parts on the cross-section, one on the left and one on the left, and there is overlap between the two internal moulds (the specific form can be referred to the drawing of the core-pulling die). The core-pulling die should be equipped with a limit device to prevent the internal die from exceeding the design size of the drawing when it is lifted. When pouring concrete, in order to prevent cement slurry from entering the joint and causing difficulty in closing, a plastic film should be covered on the internal mould.

_6. Hollow slab plug is generally divided into two types, one is flat form, the other is broken line form. When lofting the plug slab of Skew Hollow Slab bridge, first of all, the degree of skew should be made clear. Usually, the degree of skew is the right deviation of the center line of the route. The pre-tensioned method or post-tensioned method should be considered in the construction of hollow slab plug, and appropriate voids should be left for the pre-tensioned tendons. The part through the inner die in the middle of the plug board of hollow slab should be more than 2 mm larger than the outline of the inner die, so as to prevent the inner die from passing through the plug board during construction.

_7. Attention should be paid to the design of seismic anchor bolt holes and lifting beam holes (if Party A has production requirements).

It is suggested that standardized design should be adopted in the future design of hollow slab formwork to meet the standardized requirements of products.

_2. According to previous design data and hollow slab mid-beam section, the lower end of small box girder mid-beam is generally 1240mm and 90mm. (Of course, the size of hollow slab in some design institutes is different from the general drawing issued by the ministry, and should be based on the actual drawing.) Because the length of the flange plate is different, the size of the upper orifice of the hollow slab is different. According to the statistics of hollow slab pull bolts over the years, it is found that the length of the upper end of the middle beam is M16*1550 and M16*1300. Therefore, in the future design, the length of the pull bolt should be designed as far as possible in the above two lengths so as to use spare parts. 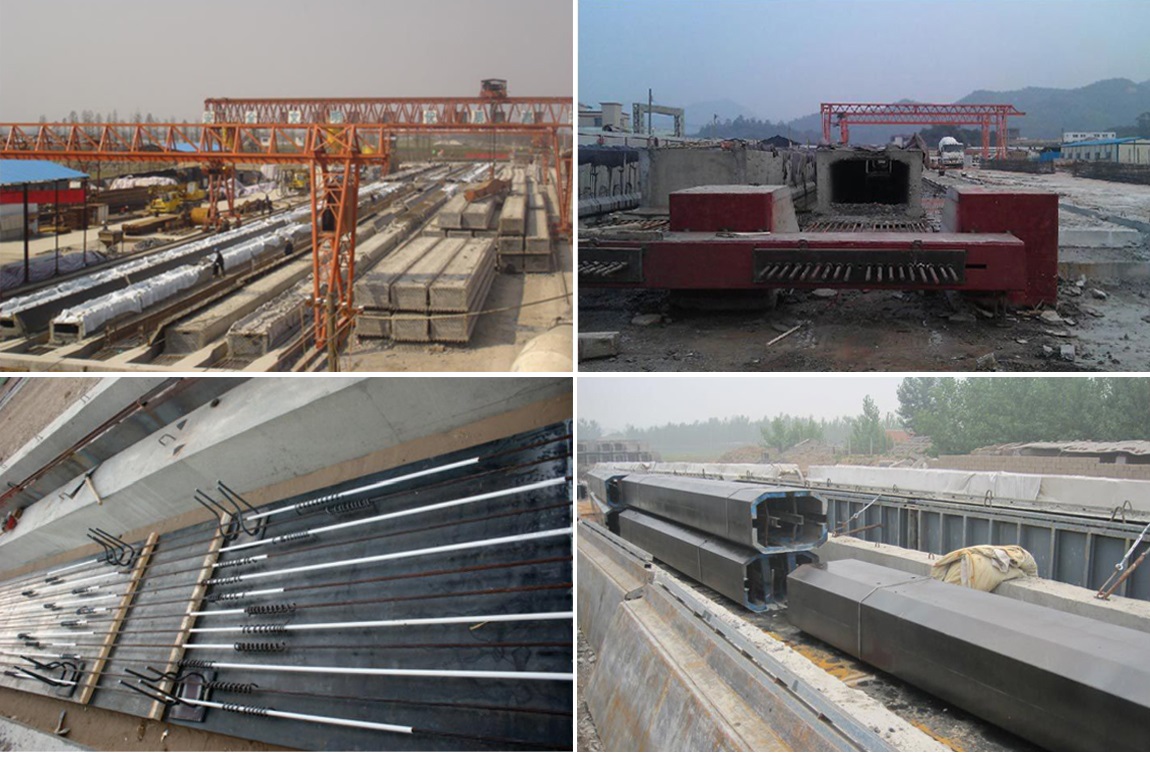 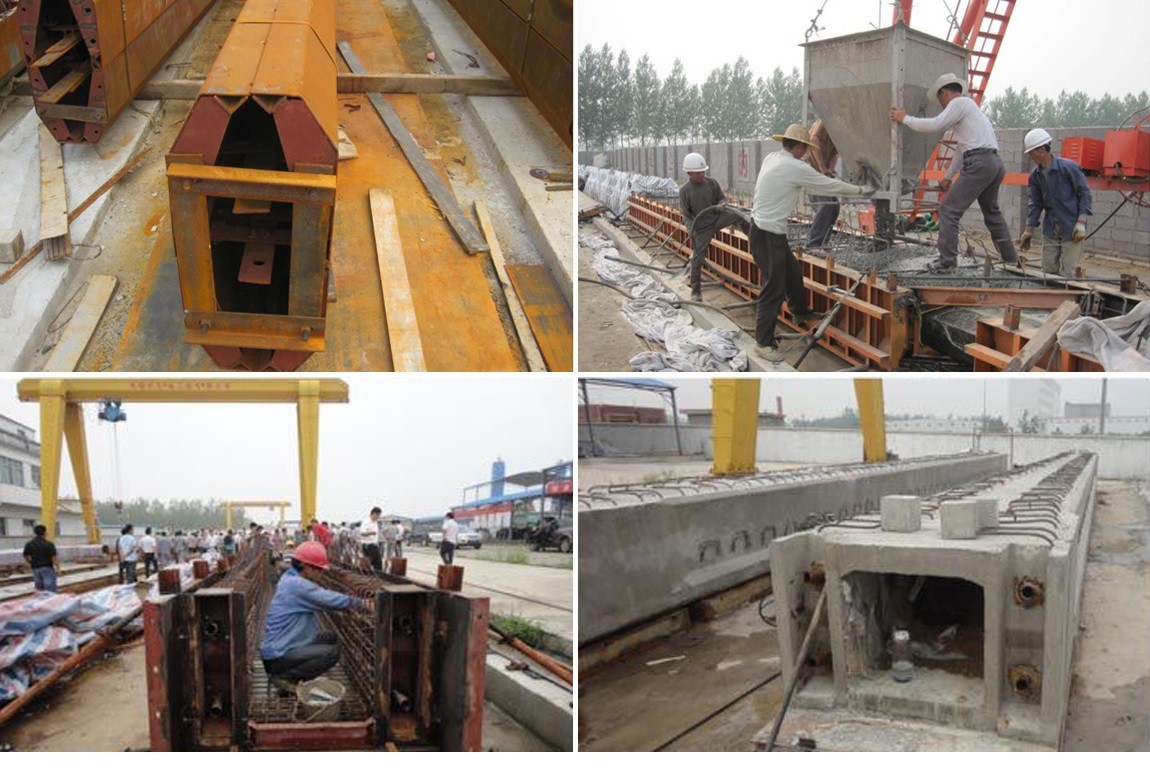