1、 Structural Form of T-Beam of Highway

The structure system of T-beam in highway engineering can be divided into two kinds: simply supported and simply supported and continuous. We usually do this kind of system (i.e. with negative bending moments), so when we make the formwork of T-beam in highway engineering, we need to distinguish the middle span (continuous end) from the side span (discontinuous end), the middle beam and the side beam (in which, the transverse slope). When the support cushion is not adjusted, the side beams are divided into inner and outer beams; there is no middle span (continuous end) in the simply supported structure system. The span of small box girder is generally 20 m~40 m, of which 25 m~40 m is the majority. The design styles of T-shaped girders in design institutes are quite different, and the height of girders increases with the increase of span. As an assembly structure, the prefabrication of highway T-beam is easy to realize mechanization, factory and standardization construction.

In order to facilitate standardized construction, T-beams are prefabricated by T-beams and hoisted to piers and abutments for wet joints of flange plates and diaphragms. Negative bending moment of deck tension and wet joints of wet joints complete the system conversion into bridges. Different spacing of beams is adjusted by wet joints. The transverse connection of T-beam of highway adopts the measures of diaphragm, wet joint of flange plate and cast-in-situ integral deck layer to ensure that each beam forms an integral whole and bears force together.

The standard cross section of_composite T-beam is shown as follows: 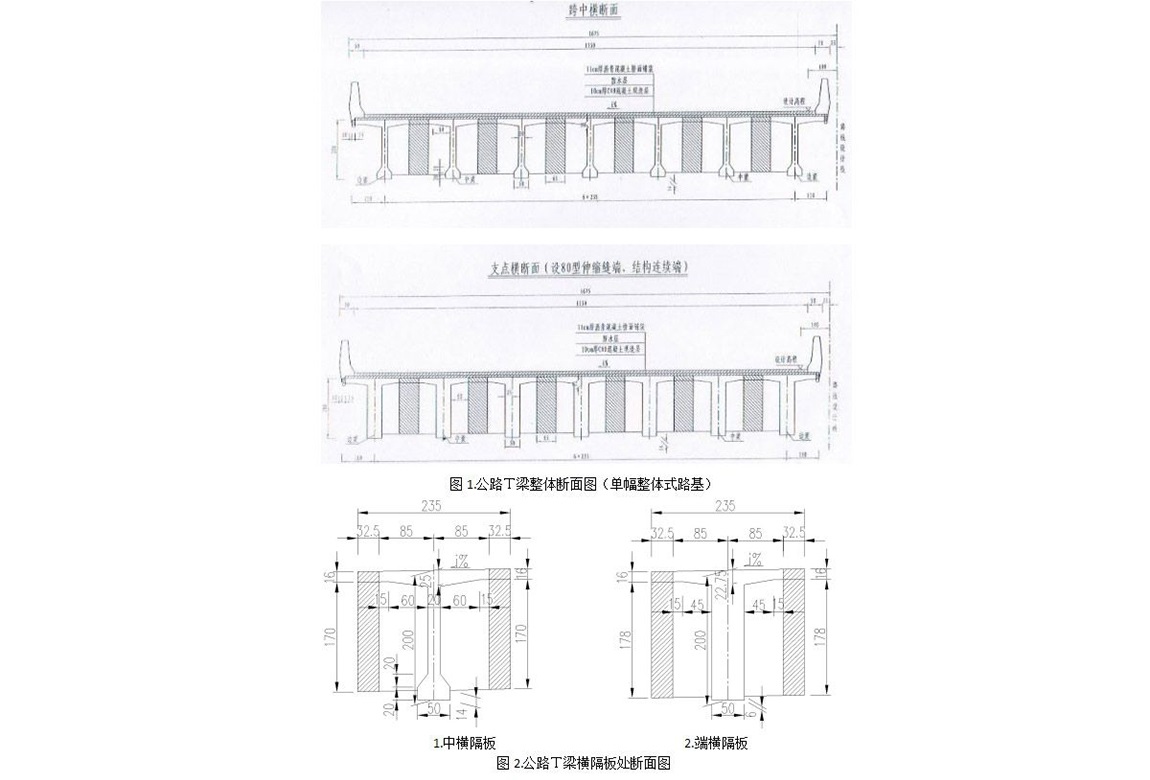 2、 Construction of T-beam formwork for highway

Because after removing the formwork, the beam body needs to be stretched and maintained on the bottom die for a long time. The bottom die usually corresponds to multiple external formwork. The overall installation sequence of the formwork is to tie the reinforcing cage on the bottom tire first, complete the end die splicing and pierce the prestressing steel bundle. The side die is assembled by the end die of the side die package. Install the top and bottom pull bolts to fix the exterior die to the casting position. Before installing the template, the surface of the template is treated by a grinding wheel grinder, and then the release agent is coated evenly. When supporting formwork, the joints between the two formwork are tight, and slurry stop strips are placed to prevent slurry leakage. The formwork is strengthened by upper and lower tie rods and supports, and the number of tie rods and supports must be able to meet the stability requirements of the formwork.

3、 Design of T-beam formwork for highway

The design of T-beam formwork for highway generally needs the following original drawings: general layout of bridges, dimension parameter tables of unequal-width or unequal-length beams, general description of design (mainly considering the number of beams, mid-span and side-span, concrete left-right inclined problems of skew intersection, whether internal and external beams are in curve sections, and other matters needing attention); general structural drawings of beams（ Mainly used for detailed cross-section and longitudinal dimension confirmation; pre-stressed anchor solid phase diagram (mainly used for end-die design); flange plate, diaphragm, end-die rib drawing (when there is demand for rib hole or comb plate); negative moment diagram should be correlated when there is negative torque and it affects the design of internal and external dies or when negative moment slot box is needed. If there are other special requirements, Party A shall submit the relevant original drawings for submission.

The appearance of prefabricated beams is an important part of the appearance quality of bridges, and the highway T-beams with more partitions and negative bending moment tooth plates make it difficult to dismantle the formwork. When prefabricating T-beams, the turnaround times of formwork can reach dozens or even hundreds of times. When prefabricating, the attached vibration tamper is usually used with the inserting vibration tamper. Vibration of concrete, and T beam narrow under the upper width. This requires the design of T-beam formwork to have sufficient strength, stiffness and stability.

_2. The external formwork of T-beam is usually divided into standard section and partition section, with negative bending moment teeth on the standard section. If Party A has not made any special requirements for the section of the template, it is suggested that the length of the section be an integral multiple of 1.5m in order to facilitate the ordering of the plate at a fixed length. When T-beam is orthogonal, the length of the section of the template from the center of the partition to the center of the partition can be considered.

_3.T formwork is mainly fixed in the form of top-down tension, the top-down tension is fixed on the T-beam external formwork support, and the bottom-up tension is fixed on the double channel steel at the bottom of the lower through-long external formwork. T-beam external formwork support is usually supported by support screw or wooden wedge in the lower part of the support, taking into account the site conditions (after communicating with Party A, it is determined that if there is no communication, it can be all made into the form of lower support bolt).

_5. When the concrete strength of T-beam reaches a certain strength, the external formwork of T-beam can be demolished. In order to prevent the formwork from bringing out the concrete of the negative corner of the partition board, when designing the external formwork, the chamfering or fillet treatment should be done at the negative corner of the partition board at the end of the external formwork and the middle partition board. In order to facilitate the removal of the external die at the partition, the inclination should be made both inside and outside of the template at the partition. The specific inclination can be determined by communication with Party A. Generally, the difference between inside and outside is not less than 3 cm. For the convenience of demolition, inclination should also be done at the negative bending moment gear plate, and the right angle should be rounded transition. The specific inclination size should be agreed with Party A. The diaphragm reinforcement holes are usually enlarged and the long holes are close to the edge of the plate or even U-shaped incisions are used. After the reinforcement is sealed, pouring can also be used for round holes with small diameter enlargement, but it is often difficult to demolish the die. On the sharp side of diaphragm of oblique beam, the diaphragm and web should be treated with arc or chamfer not less than R50, which is convenient for demolition as shown in the following figure:

6. Prestressed pipe holes and steel bar openings in T-beam end formwork should refer to the layout of prestressing steel bars and the design of common steel bar drawings, so as to ensure the accuracy of quantity, angle and position of fixed plate of prestressing anchorage. The end formwork of skew beams must be laid out in three dimensions, and the end formwork style, size and structure should be expressed intuitively, and the design should be refined after being examined by construction units. The diameter of the end die reinforcement hole and the diaphragm reinforcement hole should be 4-6 mm larger than the design diameter of the reinforcement. When forming side span end die with anchor hole type tension box, attention should be paid to the size of the anchor hole. The space size of the anchor hole can be put into the top diameter of the tension jack. The main considerations of end-die partitioning are: accurate structure size and shape, easy positioning and installation, easy to assemble after the internal die is lifted in, convenient for the general use of middle and side beams, convenient for the operability of demoulding due to the multi-tendons. Anchor hole formwork at negative bending moment tooth plate needs to be made. Attention should be paid to avoid the conflict between the removal of anchor hole formwork and the external formwork support near the tooth plate. If conflict is unavoidable, the support shall be designed in the form of a template for easy removal of anchor holes.

The flange plate of_7.T beam can be designed as comb plate. When the T-beam external formwork support is close to the comb plate, the external formwork support should avoid clashing with the steel bar extending from the flange plate as far as possible. If there is a real conflict, the construction site should consider whether the flange plate can properly adjust the distance of the steel bar. Generally, the comb openings are upward, and the bottom welded small angle steel with hole is connected with the side die. Also, the comb openings are downward. The upper openings are connected and fixed by round steel or angle steel longitudinal beam and cantilever rod, which are connected and fixed by cantilever rod and external die bracket. The gap between comb mouth and steel bar is usually considered by the construction party.

_8. When designing the external formwork of skew T-beam, the brackets on both sides of the partition should be as far away as possible from the partition to prevent the clash between the steel bar of the partition and the external formwork bracket, and there is more space for the construction personnel to operate. When the skew T-beam formwork is used in general, the bracket layout needs to do a good job of all kinds of angles, corresponding to the position of the two sides of the bracket, and do a good job of the number of the agreed instructions. The high and low sides of the diaphragm, the reverse and positive sides, the left and right sides of the diaphragm should be numbered, and the general layout instructions with unified numbers should be attached to the production department and customers.

_9. Hoisting holes should be set in the external formwork support to facilitate the swing hoisting and transportation of formwork on the construction site. The neck and neck of the external formwork bracket should be provided with anti-torsion measures. When the support bottom is fine-tuned with wood wedges, it is necessary to flatten the steel bottom plate and weld the fine-tuning bolts when the screw is fine-tuned.

It is suggested that standardized design should be adopted as far as possible in the future design of highway T-beam formwork to meet the standardized requirements of products.

5、 Picture Reference for Construction of T-Beam Formwork of Highway 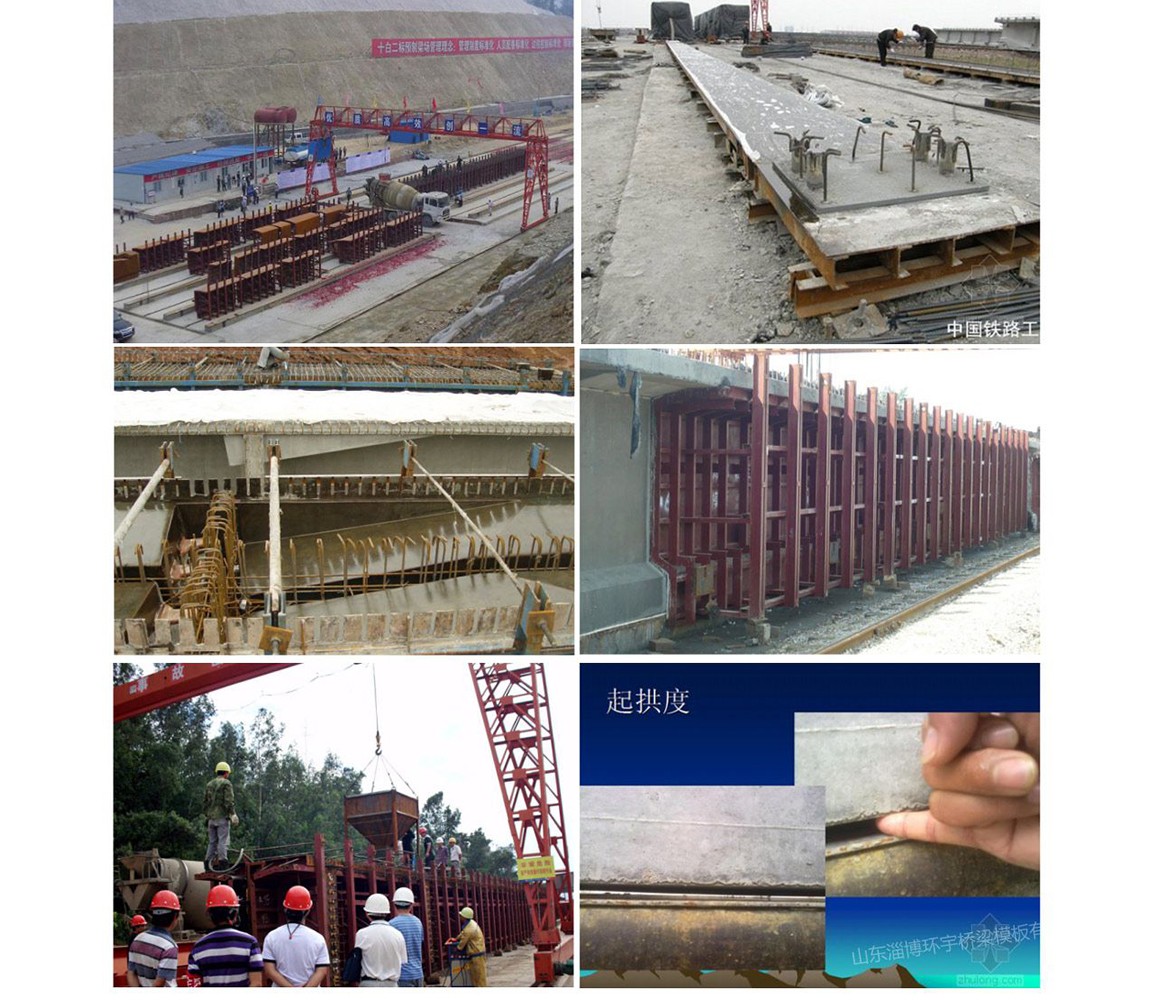